Mondays are best for flying out of the window 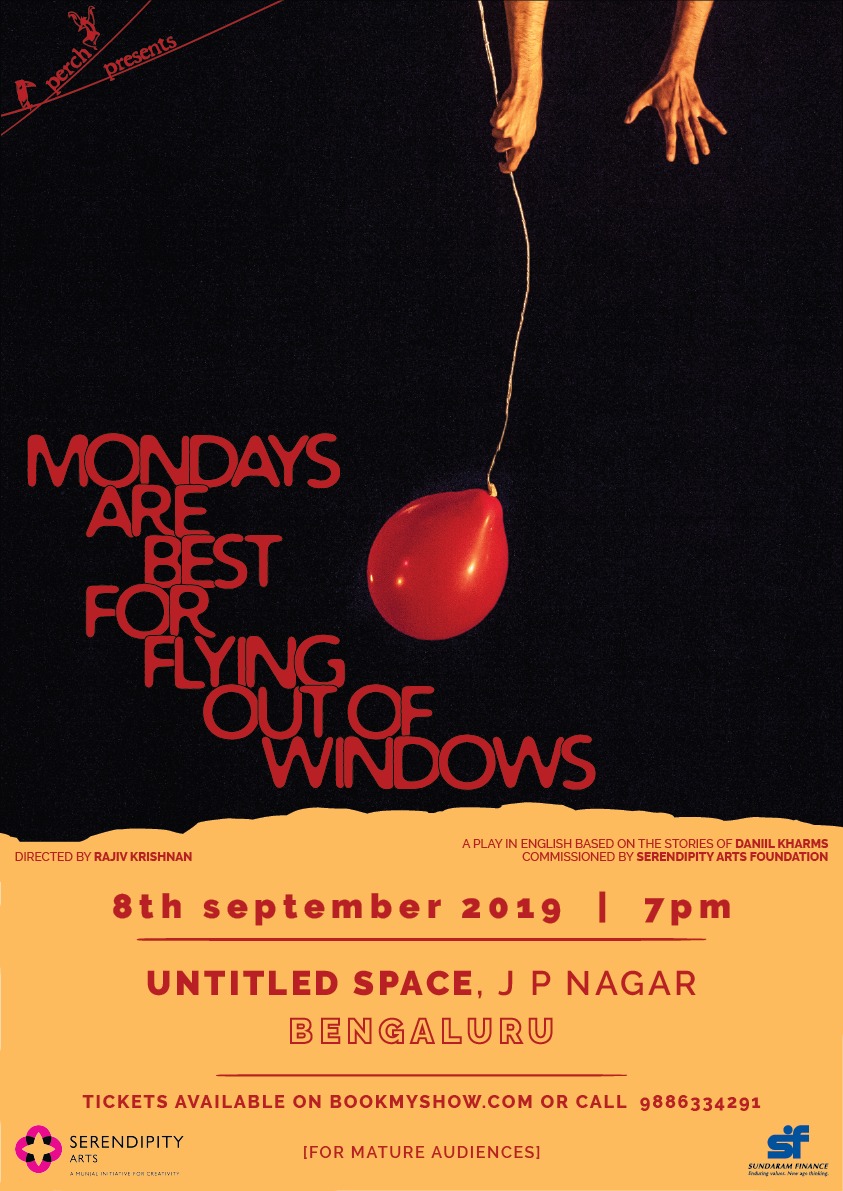 Perch presents
‘Mondays are best for flying out of windows’
A play in English
Inspired by the stories of the Russian writer Daniil Kharms
Duration: 90 min (without intermission)

Tickets for all the above shows will be available at bookmyshow
Limited seats in most venues so book early!
See you there and do tell your friends, family, colleagues and others who might be interested!

“MONDAYS ARE BEST FOR FLYING OUT OF WINDOWS” is inspired by the stories of Daniil Kharms (1905-1942), an early Soviet era absurdist poet, writer and dramatist. Kharms was often incarcerated by the Stalinist regime of his time for his unconventional and rebellious ways. His adult literature was not published during his lifetime and he was confined to writing for children. He is said to have starved to an anonymous death in the psychiatric ward of a Soviet hospital after being arrested in 1942.
A girl finds a job as a cashier in your store, turns the handle on the cash-till and dies. What do you do? Stick a mushroom in her hand and pretend she’s alive. People throw themselves off windows, they leap out of cupboards, they spend maddeningly long hours in queues, they attack each other with snot and cucumbers, they fall, they sleep, they fight, they die. This is the world of Daniil Kharms. Chaotic, absurd, sometimes frightening, often incomplete.
Kharms is a contrasting figure in the lineage of great Russian writers. While works of authors like Tolstoy, Pushkin and Dostoevsky are classics, most of Kharms’ stories can fit in half a sheet of paper, ending before they have even begun. You could say that he has created a genre – the anti-story – stories that seem to reject all accepted notions of narrative as a way of getting to truth.
And you find that the only rational response is to laugh. The worse it gets, the more you laugh. Kharms is the master of dark laughter. It’s so ridiculous, so absurd, it can’t be true right? Right?
‘Mondays are Best for Flying Out of Windows’ was specially commissioned for the Serendipity Arts Festival and premiered in Panjim, Goa in December 2018. Since then, it has been staged at ‘The Remembering Veenapani Festival’ at Adishakti Theatre, Pondicherry in April 2019 and at Jagriti Theatre., Bangalore in May 2019.

The decision to work on the stories of Kharms was a complete accident. It germinated in the campus of the Adishakti Theatre in Pondicherry, which is where we met Jonathan Walton, a musician, sound engineer and man of many parts, who was living in Auroville at that time. He casually mentioned Kharms as a writer who had influenced him immensely. Much much later, wondering what to do next, we started reading Kharms, and well, that was the beginning. After The Serendipity Arts Festival, Goa commissioned us to work on a play, we decided to look at Kharms in earnest. We rehearsed this play entirely in Pondicherry, for about 7 weeks between mid September and end November 2018, at the Indianostrum theatre, Adishakti Theatre and a friends place, and it premiered in Panjim, Goa in December 2018.
Our approach to Kharms was from a state of complete unknowing. A piece of text, a thought, an idea or an image triggered off our explorations. The entire process was a challenging one to say the least. This play represents our individual and collective response to Kharms, conceived in a true spirit of collaboration.
The play has 5 actors (1 from Chennai, 1 from Pondicherry and 3 from Bangalore) and a musician from Calicut, who plays the Cello, Guitar and Keyboard. Puppets play an important role in this piece. Like most things, the choice of working with puppets was a chance occurrence. Not being trained puppeteers we started from scratch, using storytelling as a guide. Hopefully the puppets help us tell our stories better. And like every piece of ours, we see this work too as a work in progress, evolving as we present it to audiences. We want to take this play everywhere — to auditoriums, intimate spaces, alternative spaces and particularly to homes — so if anyone who watches it is interested in staging it in their home for a small circle of friends, do get in touch with us. And as much as we want to engage and provoke you the audience, we hope that you will engage with the piece and provoke us in turn. In true Kharmsian spirit, we invert the typical theatre greeting and direct it to the audience – Break a leg you guys!

ABOUT PERCH
PERCH is a theatre collective based in Chennai. It was formed by a motley bunch of actors, designers, filmmakers, journalists and others in 2008. Perch’s plays include ‘Under the Mangosteen Tree’ and ‘Moonshine and Skytoffee’ (both based on the short stories of the Malayalam writer Vaikom Muhammad Basheer), ‘Miss Meena’ (inspired by ‘The Visit’ by Friedrich Durrenmatt), ‘Kira Kozhambu’ (created from ‘folk tales of Tamilnadu by Ki. Rajanarayanan), ‘Jujubee’, a play for children, ‘Vyabaramayanam’, a play on ideas in Tamil, ‘How to Skin a Giraffe’ (Inspired by ‘Leonce and Lena’ by Georg Buchner), ‘Cheruvannur Diaries – Typewriter Tales’, ‘Monkey and the Mobile’ and ‘Mondays are best for flying out of windows’, most of which have been staged widely both at festivals and other venues across India.